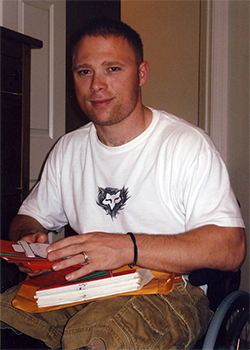 For the past six years, Staff Sergeant Travis Strong of Golden, Colorado had trouble sleeping at night and woke with a sore back in the mornings. That’s all changed thanks to the donation of an adjustable bed from Easy Rest Adjustable Sleep Systems.

November 6, 2012 – Baltimore, MD — Staff Sergeant Travis Strong has had difficulty sleeping for the past six years after being severely injured by an Explosively Formed Penetrator (EFP) roadside bomb in Baghdad, Iraq. But that has changed since receiving a new adjustable bed from Easy Rest Adjustable Sleep Systems. Now, he reports that he is sleeping much better and experiencing less pain in his back since he received his new bed as a recipient of Easy Rest’s Beds For Our Troops Program.
SSG Strong was on his second deployment to Baghdad when he was injured. His platoon was on a night patrol enforcing curfews when they turned onto an empty street and rolled over the EFP bomb. He knew he was hit, and as he came in and out of consciousness he was convinced he was going to die. Thanks to the hard work of the medics in the field and the doctors in Balad and Baghdad, Iraq, Landstuhl, Germany and Walter Reed in Washington, DC, he survived. He lost both of his legs in the explosion and has undergone countless months of rehabilitation, recovery and therapy to learn how to use his new prosthetics.

“Because I have no legs my back arches a lot, especially with the bed I had because it sagged in the middle. I used to have a lot of back pain in the morning,” said SSG Strong. “I really like my new bed and I feel better. My back pain is gone in the mornings now.”

“We are honored to be able to help SSG Strong achieve a good night’s sleep and an improved comfort in bed,” said Mo Maghari, National Sales Manager for the Easy Rest adjustable bed brand. “It’s the least we can do for all he’s given for our Country and that’s the reason we created the Beds For Our Troops program.”

After being discharged from the hospital SSG Strong moved to Golden, Colorado. This past August he married his fiancé and they enjoyed a romantic honeymoon in the Virgin Islands. SSG Strong enjoys mono-skiing in the winter and participating in marathons on his hand bike in the summer.