Made in America Commitment

Easy Rest Adjustable beds will continue to be “Made In America” at plants in Kentucky and Tennessee.

This week a controversy erupted in the American Political arena over the United States Olympic Team Uniforms after it was revealed that American athletes would be wearing clothing manufactured in China. The outcry over continued job loss for American workers has motivated executives at Easy Rest Adjustable Sleep Systems, a leading provider of adjustable beds, to reaffirm their commitment to manufacture their complete line of adjustable beds in the United States.

“We’ve been approached many times to shift part or all of our production overseas,” said Jeffrey Mowrey, Chief Operating Officer for Easy Rest Adjustable Sleep Systems. “We refuse to do it for two main reasons. First, we refuse to use inferior components on our adjustable beds. Other bed companies do it but we don’t believe those products are the highest quality available. Second, and most importantly, we believe strongly in keeping jobs on American soil. By insisting on having our products made here in the United States we are providing jobs to hundreds of hard working Americans. And, that makes us sleep well at night,” added Mowrey.

Many bed companies selling adjustable beds have been unable to resist the temptation to lower costs by outsourcing some, or all, of the production process. However, that outsourcing can come at a cost. The largest manufacturer of adjustable bed bases sold in the United States recently recalled more than 25,000 bases because electrical components in the motor control board they imported from the Far East can fail and short, causing overheating and posing a potential fire hazard for consumers.

“In this difficult economic environment that we have been in for the past four years, we have constantly had to look for ways to control our costs and still remain competitive,” stated Mo Maghari, National Sales Manager for the company. “But every time the subject comes up about outsourcing we shoot it down immediately. We are very proud of the fact that we are an American Company whose products are made on American soil. Everyone involved with Easy Rest takes great pride in this fact. It’s a very important part of our corporate identity.”

Easy Rest’s complete lines of adjustable beds are made in factories in both Louisville and Georgetown, Kentucky and Nashville, Tennessee. The company sells more than 1,500 adjustable beds a month in the Continental United States.

Get Details On Our Beds 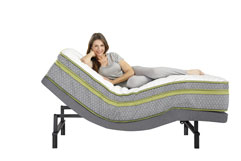 What our clients think

"I'm happy with the Easy Rest bed. I've been more or less home bound for some time and I'm very pleased with it." - F. of West Virginia

"This was an excellent purchase! My husband sleeps in the bed now. After months mostly spent in his recliner, he now rarely gets up at night. He brags about how well he sleeps. I am getting better rest and sleep since he’s not disturbing me with his ups and downs. Hooray!"

Get Details On Our Beds